June 30, 2019
Those little OLED displays are everywhere, and there's a good reason. They're inexpensive, easy to program and they look good. I wanted to explore how much current they draw so that I can plan better for battery powered projects.

These are the displays I used for my tests. I like to use the I2C breakout board versions for simplicity. There may be inefficiencies in the linear regulator and other discrete components which come on the breakout boards, but since the active displays use milliamps, losing a few microamps shouldn't be a big deal.

What about color and grayscale OLED displays?
I was asked on twitter to include a quick test of these OLED displays. I could tell that the power usage was high because the controller chip gets hot to the touch when barely anything is displayed. I no longer have my SSD1351 color OLED to test, but I do have an SSD1327 128x128 4-bit grayscale display. With the display set to 'off', I measured 600uA. Here are some values I measured when the contrast (brightness) was set to the maximum value:

In general, the display uses a lot more current to get the same pixel brightness compared to the monochrome SSD1306 displays.

Procedure:
I ran 8 different tests on each display. The "dim" setting has the contrast set at a value of 31. This is comfortable to read in indoor light or at night. 127 is the default contrast and is reasonably bright. 255 is the max brightness. The current was measured by inserting the multimeter probes between the Vcc of the display and a 3.3V power source (in this case, the regulated output of the Arduino). There was very little visible difference between contrast 1 and 31.

* The 72x40 display didn't appear to respond to the contrast setting and had a permanent and somewhat dim contrast.
* The 128x128 display is sold by Pimoroni; I don't have other examples to test

I thought that the 128x32 was an anomaly from a specific vendor, but a second display from a different vendor behaved the same way. Strangely, a second 64x32 display from the same vendor, bought in the same batch, used twice as much power as the one tested above.

I chose the most efficient display to do a final test which displays text (less than 50% pixel coverage). My ammeter read 630uA for a static text display on the 64x32 OLED. 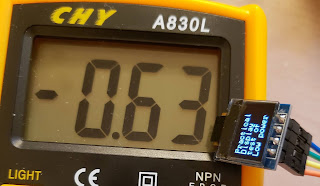 What about active data writing?
Besides extra activity on the display controller, there will be current leaking through the pullup resistors when the SCL or SDA lines go low. Typical pullup resistors for these displays are 4.7KOhm, so while the data and clock lines are active, about 700uA (3.3V / 4700 ohms) will leak through them. I tried a test where I continuously wrote the same data to the display (same display and same text as above). The results were a reading of 1.47mA. Different pullup resistors and different data being written will produce different results.

The last item above surprised me the most. The power indicator LED on most Arduino boards uses more current than the 64x32 OLED with useful information displayed on it.

To answer my last question about the practicality of OLEDs versus commonly available LCDs for battery powered projects, I think it depends on the project and power source. A decent sized LCD with the backlight off can consume less than 275uA (my measurements from a 2" 128x64 UC1701). If your power budget is small and your MCU is programmed to sleep most of the time (avg current < 1mA), this can make a huge difference compared to a 5-20mA OLED displaying the same info. On the other hand, if you're powering a Raspberry Pi Zero or ESP32 w/WIFI on (80-120mA), another 5-20mA won't make as big a difference to your power budget.

Getting started with the Arduino IDE 2.0 debugger

Intro I believe Arduino's software development IDE has been one of the biggest reasons for their success. Combined with their core API that "just works" across multiple MCU architectures, these two elements have made embedded software development accessible to everyone. If you've ever ventured outside of the Arduino 'bubble' and tried to do embedded software development on other vendor's IDEs, then you know what I mean. They routinely involve complex setup procedures, poor documentation, custom APIs, external interface hardware, and sometimes even licensing fees. For my work, one of the most valuable features of the Arduino system is the homogeneity of working with different target processors. I use a wide selection of boards and switching between radically different MCUs usually just involves selecting the target and recompiling. One thing that was missing from the Arduino IDE was the ability to do 'live debugging' of embedded boards. On our PCs w
Read more